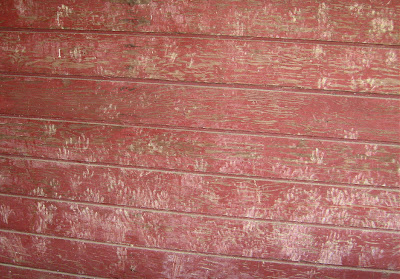 A very self-sufficient couple lives across the road from my mother, where they garden and put up jars of preserves and raise laying hens. Guinea fowl, with their oddly shaped bodies and polka-dotted feathers, roam the grounds as a pack. After a Sunday lunch a few weeks back, we took our 11-year-old guest, a city girl, over there so she could see the animals. The chickens live in a nice pen that's partly open to the sky and partly sheltered, mostly surrounded by a tall wire fence. Except for one section under the sloped-roof shelter, which has a wall made of the red wood panel you see above. As I stood looking at it, I recognized that the dirt and mud on the wall had curious patterns and prints. Then something slightly sinister emerged from the bucolic scene as I realized that they were the the marks of predators, egg thieves - raccoons standing on their hind legs and pressing their muddy paws against the wall, sniffing the air and looking for weakness. Oh little biddies, sharing an ancient and common fear, hoping the walls will hold against the threat. 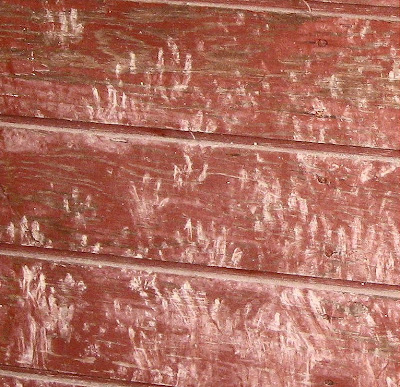