About the Power of a Photograph 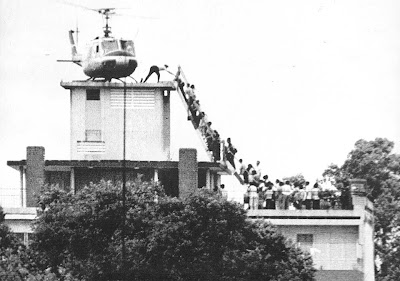 This photograph was taken April 29, 1975 - 35 years ago today - by Hubert Van Es, a Dutch photojournalist working for UPI in Saigon, Vietnam. It shows a CIA helicopter evacuating desperate Vietnamese employees of the agency and their families from the roof of an apartment building, often misidentified as the US Embassy, the day before the fall of Saigon.

The image is grainy and cropped, the composition more straightforward than artistic. Surely it was experienced meaningfully by millions, in millions of ways - to paraphrase Walt Whitman, it is large; it contains multitudes.

What I wonder is whether it has resonating power only for those of a certain age, say, over 50 - those who were in some way "there," who supported or opposed, fought, feared, suffered or suffer still from that war, and who knew what that moment captured on film meant. Or whether, like some scene from the Crimean War, its power will fade into wondering what that was all about.
Posted by Robert at 10:48 AM