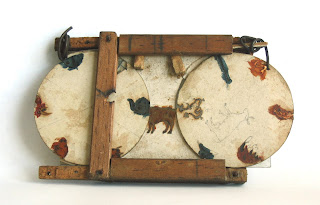 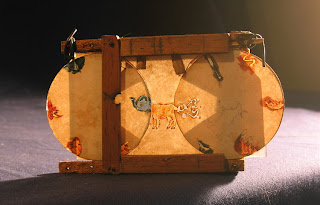 A homemade antique magic lantern slide. In the center is the image of a cow's body. The wheels can be rotated to juxtapose alternative heads and tails. Here's the head of a teapot with the tail of a kite. You can choose from a rooster, a dog, a cow, a kite, a teapot and a fish. Wood, wire, glass, paint. Just add light.
Posted by Robert at 2:27 PM No comments: 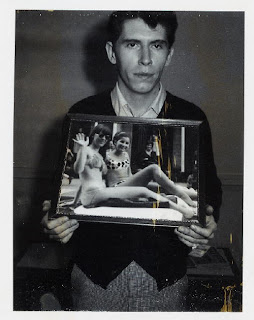 Sometimes a found object strongly recalls the work of a famous artist. If someone secretly mounted this in an exhibition of Diane Arbus photographs, I wonder if anyone would question its presence.
Posted by Robert at 3:04 PM No comments: 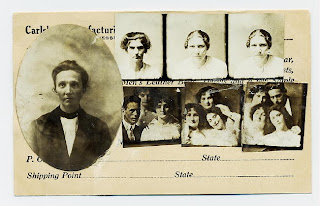 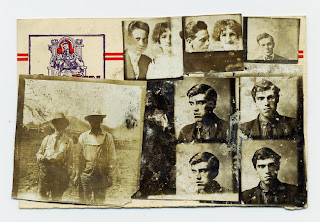 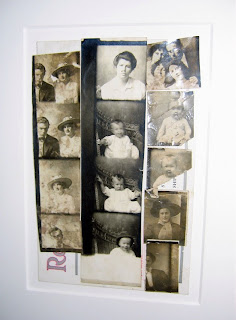 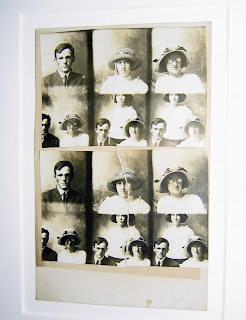 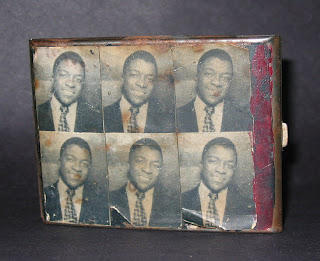 Among my favorite vernacular photo images is a group of worn and defaced photos that were then reassembled. These were found together in a small album, with notes indicating they were all from a small town in southwestern Virginia. They look almost like stamp-size photobooth images, torn up and then pasted down on cardstock. With them was a photo of a young man on a donkey with a tripod, and I've always thought he was the (itinerant) photographer and the maker of the assemblages.

The last one, from another source, is a cheap tin cigarette case with six half-tone pictures of, I assume, the owner. He added a little flair with the red paint at the edge.
Posted by Robert at 3:49 PM No comments: 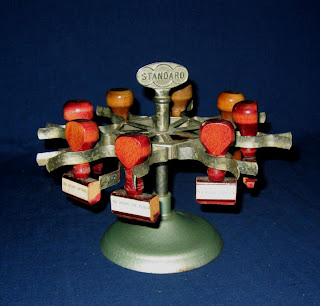 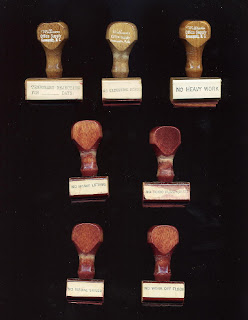 There's very little about employment that's not anxiety-inducing these days. But these artifacts from the hiring office of a long-closed textile mill in North Carolina always bring a smile. The little carousel holds eight rubber stamps, each defining a particular work restriction for employees. "No Heavy Work," No Excessive Noise," "No Work Off Floor," and my favorite: "No Visual Skills." Ouch.
Posted by Robert at 3:13 PM No comments: 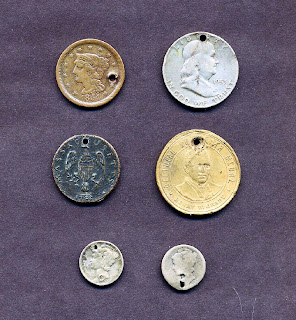 Where there's fear and uncertainty, folks sometimes look for something that gives them an advantage, or protection. Sometimes that's an object, like a buckeye, or rabbit's foot or coin. Sometimes they're called an amulet, or a talisman. Or juju, gri-gri, or lucky charm. The word talisman evolved from the Greek word telos, which means result or purpose. Amulet comes from a Latin word meaning method of defense.

Anyway, over the years I've managed to find a number of coins with holes punched into them so that they can be hung on a string or chain. I've found them with histories of being from Memphis, Macon, Atlanta and St. Simons Island, GA. Typically they have been bought from black vendors at a flea market, and have always been matter-of-factly described by the seller as charms.

There's a wonderful book titled Drums and Shadows, which documents remnants of African culture among blacks living on the coast of Georgia in the 1930s. There's a part that reads "a silver coin is frequently worn on the ankle to insure good luck and to give warning..." But ultimately their power seems to yield to pragmatic concerns, as one woman acknowledged, "The folks around here used to wear five dollar gold pieces on their ankle, but hard times just naturally makes them gold pieces jump off."
Posted by Robert at 12:49 PM 1 comment:

Why that title for my blog 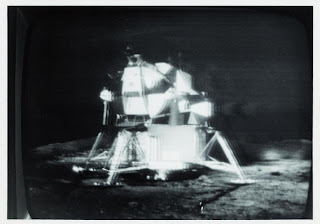 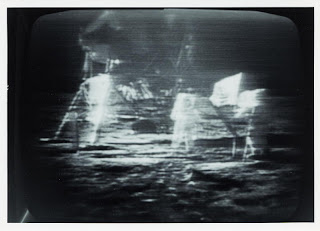 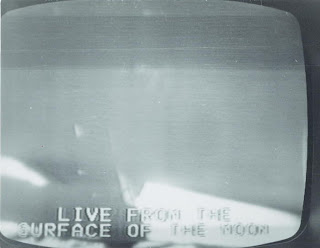 On July 20, 1969, the landing of the first manned spacecraft on the moon was broadcast on television. Rather than watch it with my family, I camped out with my friends Randy and Ronnie, hoping to see it with our binoculars. Thus we saw nothing of the event.

Many years later, I had become an active collector of found photographs, and discovered a small album of snapshots of a television screen taken as those historic images were beamed back to the eager audience. One of them had the caption, in primitive graphics, "Live From the Surface of the Moon." Somehow that seemed to capture my penchant for missing the real action, and considering it later through an artifact.

I subsequently found that many, many people were taking snapshots of the TV screen that night, and now I have a small collection of grainy, poorly focused, visible- scan-line images taken directly from TV sets in living rooms all over America.