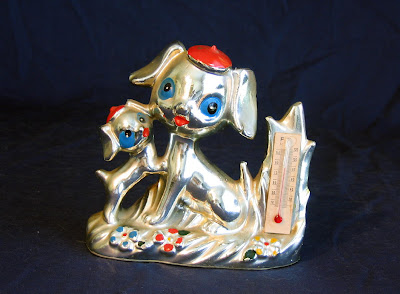 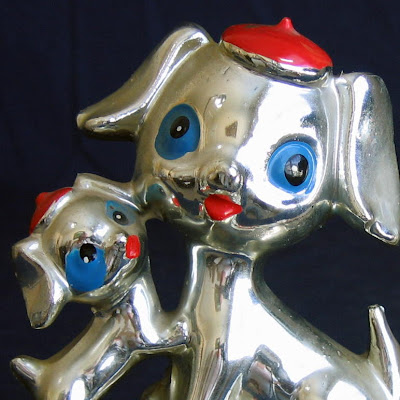 I have a complicated relationship with kitsch. On one hand, as a general principle, I think a cheap laugh is better than no laugh. But that can leave you with a vague sense of guilt, like it's just so easy to ridicule some things that maybe the most honorable thing is to ignore them, and try not to stare. And then a hot-shot contemporary artist starts making work like chromed inflatable vinyl rabbits, and glossy ceramic Michael Jackson with Bubbles statues and such, and here we go with seeing things anew through the eyes of an artist. It gets into the whole conundrum of taste and tastelessness and - are you still awake? - just leaves me uneasy.

Anyway, I have this sculpture of the two dogs wearing berets, with their super-sized blue eyes and flowers and oh-come-on a THERMOMETER as if that somehow justifies its existence because it's useful. And yes, that's reflective silver OVER a coat of reflective gold and the details are hand-painted. It's probably the worst thing I own. Perverse, really. And I think it's just great.
Posted by Robert at 3:20 PM 5 comments:

Labels: Maybe I should rethink this whole idea 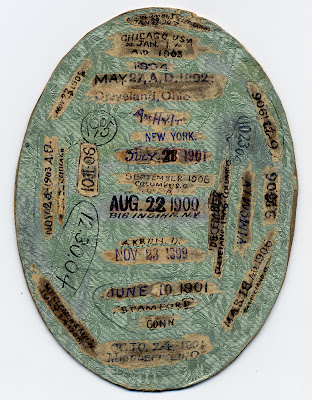 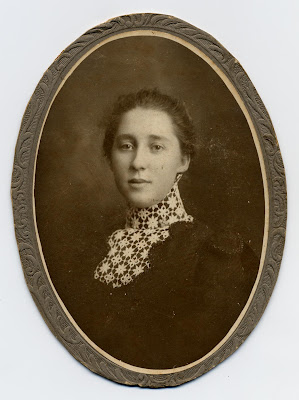 I have a photograph that's causing me to speculate. Actually, it's the information added to a photograph that's causing my cogitation. The photo is an oval portrait of a lovely young woman circa 1900. It was mounted on heavy, embossed cardstock which has been closely trimmed. Now check out the back side. Areas of the metallic green paper backing have been rubbed away, down to the raw cardboard beneath, and lots of dates and place names inscribed, some handwritten, some stamped. The dates range from November 1899 to January 1907, and include at least one entry for every year between: 1900, 1901, 1902, 1903 A.D., 1904, 1905 and 1906. Places include Cleveland, Chicago, New York, Columbus, Middlefield, and Akron OH,, Big Indian, NY, Stamford, CT and Mt. Clemens, Michigan. It's almost like a passport.

Has anyone ever seen anything similar? Was there a game, sort of a mail art project? Just wondering.

And isn't her lace collar great!
Posted by Robert at 4:11 PM 6 comments:

Recently a distant relative called and offered my family copies of documents and information she had uncovered during genealogical research over the years. She and I both have a number of relatives who were Confederate soldiers during the American Civil War. Among the things she gave to me is a group of letters written by James Matthew Jordan, a private in the 27th Regiment, Georgia Volunteer Infantry, to his wife Louisa, with asides to his father and mother in some of them. I want on this Memorial Day to share a few excerpts from his letters that I think will surprise you.

Jordan was a lively and engaging corrrespondent, and reflected on topics ranging from politics, to management of his farm in his absence, to the stories of the foot soldier - fatigue, hunger, fear, rumor, health and sickness, combat and death. He loved his family desperately, and frequently expressed his pain at being away from them.

February 14, 1863
"Dear wife, and father and mother as this letter will be carried by a friend I will write some thing that I would not write if I had to send it by mail for if I was to start it by mail you might not get it and I don't like to write anything that will cause a fuss. Father, I am this day as strong a Union man as ever walked on the soil of Va. I would hate to desert but if I got a good chance I will be sure to do it. I never expect to kill a Union man. They may get me in a fight but I will not do them any good. I never intend to fight for a government that intends to enslave me and my children and all other poor children. Father, I cannot express my feelings by writing on this subject, but if I could see you I could let it all out with some satisfaction.

August 8, 1863
"Dear Lou, I sent you and the children some sea shells by Capt. Daughtry. I picked them up out of the waters edge of the great Atlantic. Lou, it is a grand scene to view the big water, to any one that never did."

September 10, 1863
"My dear wife, we suffered for water and something to eat and for sleep very much. We got only one meal a day to eat. Lou, turn on the next page."

March 21, 1864
"My darling one, I could extent this letter to 6 pages about first one thing and another, but I don't reckon it would amuse you much. So I must close by asking you to give Charity and Agnes [his daughters] a sweet little kiss each for me and give to them this little pretty piece of paper which I found on the battlefield dropped there by a Fed. I am, as ever your loving Mattie until death."

Three months later, James Matthew Jordan was captured at Petersburg, VA, June 16, 1864. He died in the Union prison at Elmira, NY on January 26, 1865, without having seen his beloved wife and children again.
Posted by Robert at 9:01 AM 2 comments:

It feels like a dark cloud is over me 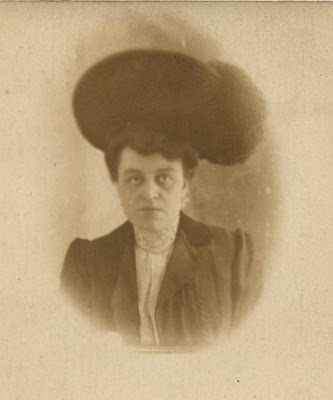 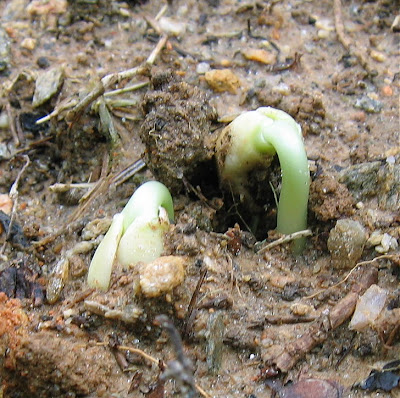 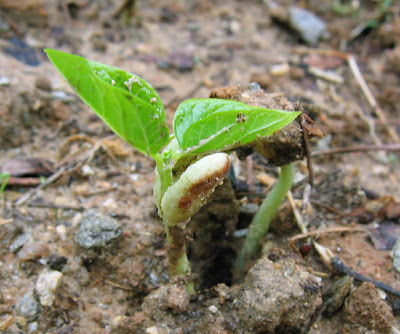 My urban backyard doesn't have much space for gardening, but we've decided to give it a try in a few sunny spots. So I built a wooden frame and dug some dirt out of the nearby woods to fill it, and last week pushed a few seeds into the ground. Over the weekend, they started pushing back, their tender little necks and leaves lifting up to light.

Around here it's important to have a serving of hot blackeyed peas on New Year's Day for good luck in the coming year. Next year I hope to serve some homegrown ones. Until today I had no idea that this tradition is recorded in the Babylonian Talmud, and that there's some evidence that it has its roots in Jewish practice.

The plant is native to Africa, but it's grown and nourishes people all over the world.

One of the best references to it in popular culture comes from Bobbie Gentry's 1967 hit "Ode to Billy Joe": "Papa said to Mama as he passed around the black-eyed peas, 'Well, Billy Joe never had a lick of sense; pass the biscuits please.'"
Posted by Robert at 2:29 PM No comments: