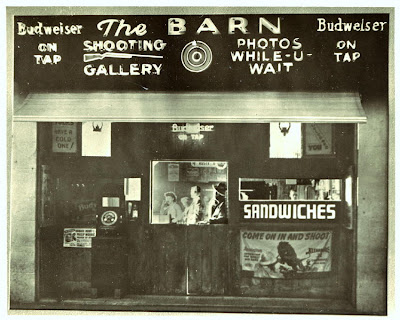 Photos While-U-Wait, Shooting Gallery, Budweiser On Tap and Sandwiches. It's like Homer Simpson's favorite business ever.

But I'm an art lover, so what I see is like Walker Evans took this picture and mailed it to Edward Hopper for the scene just past the swinging half-doors, and he mailed it to Jasper Johns for the neon target over the door, and he mailed it to Warhol for the photobooth snaps, and then Chris Burden shows up to get shot, literally. Plus beer and sandwiches.

Eh, I get carried away. But I think it's a crazy concept, The Barn.
Posted by Robert at 4:05 PM 4 comments: 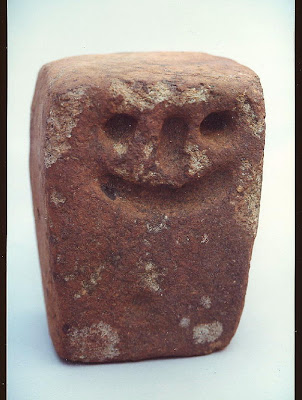 This brick is slightly tapered, a keystone shape. It is much heavier and thicker than a modern brick, and was manufactured in Milledgeville, Georgia in the late 19th or early 20th century. Just before it was sent to be fired in the kiln, a worker used his finger to poke two holes for eyes, a slight scoop for a nose, and then drew an arc into the wet clay for a smile. Four quick little gestures that made something lasting and engaging.

There were a number of creative laborers working at this factory, and coin banks, birdhouses, planters and other sculptural forms have been found. I'll try to share a few more over time.
Posted by Robert at 3:12 PM 4 comments: 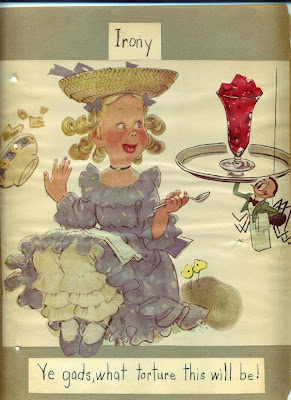 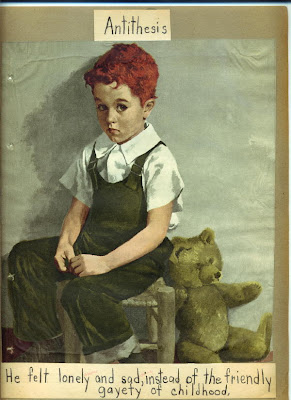 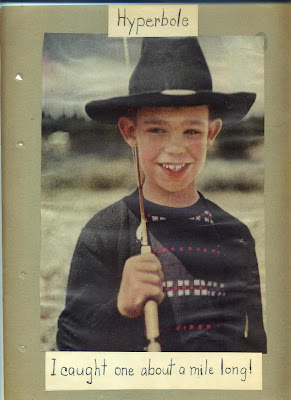 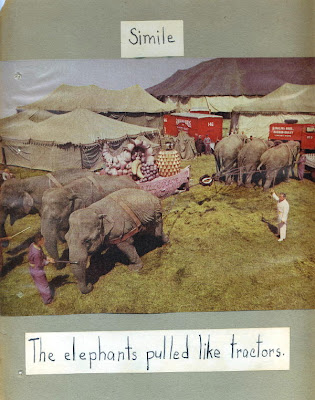 Pages from a homework assignment to illustrate figures of speech.
Posted by Robert at 1:49 PM 2 comments: 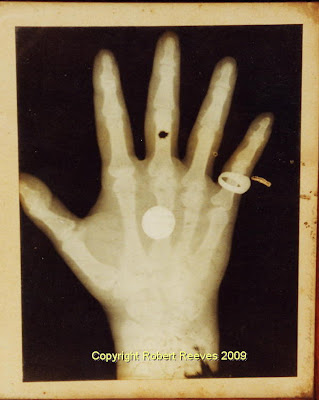 In many years of finding, collecting and selling photographs, this one has a special place.

It was discovered on a house call, where I'd gone to look at a carving, and by habit asked if there were any old photos for sale. The gentleman left the room and returned with this in his hand. He was descended from a horse-and-buggy era physician in middle Georgia. Somewhere near the turn of the century, the doctor and a partner had ordered the very latest technology, an X-ray machine. In order to demonstrate its capabilities, he took this image of a hand covering a coin. I viewed it as one of the earliest known experimental photographs taken in this part of the world. The doctor thought enough of it to have it framed, and I imagine that it hung in his office as a marvel for all to see.

I offered it to a regional museum curator for their collection. She laughed at me and dismissed it with "We don't collect x-rays." I had the satisfaction of selling it to the next person who saw it, a major photography collector. That collector has told me that even among all the jewels in her collection, this image gets its share of attention from people who visit.

The image below was taken by Wilhelm Conrad Röntgen, who discovered the medical use when he saw a picture of his wife's hand on a photographic plate formed due to X-rays. His wife's hand's photograph was the first ever photograph of a human body part using X-rays. 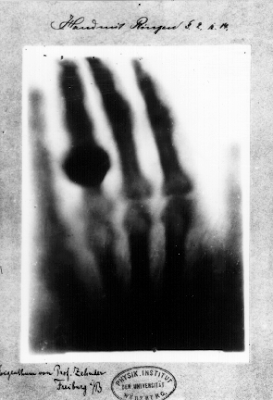 Of Sailing and Sisterhood and Scripts 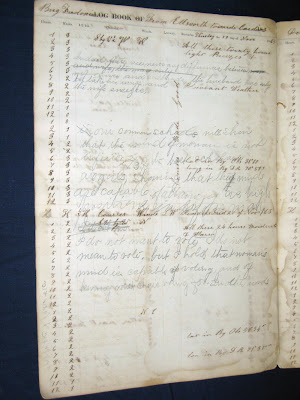 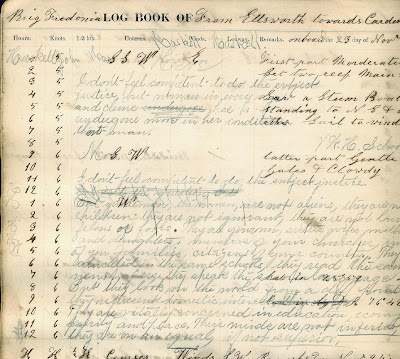 Friends Kim and David keep a fine blog called RESCRIPTED , their term for what happens to interesting objects that are adapted, repurposed and given new life. I came across something that has been literally rescripted, and since this blog is partly about evidence, here's some evidence for you.

The object at hand is a tattered ship's log book of the Brig Fredonia, dated 1863. The pages have columns and lines for entries of Knots, Winds, Course and Remarks, all dutifully noted by the ship's master, Isaac Lord, in that lovely sepia ink of the period. The ship's journeys included Constantinople, Palermo, Boston, Philadelphia, Cardenas de Cuba and other ports. The pages are full of fine terms like "fresh breezes" "light airs" and ominous "sharp lightning" and "heavy gales." In Italy they take on hundreds and hundreds of boxes of lemons and oranges. That fragrance carries across a century.

Here's where the plot thickens and the object changes into something else entirely. At some point, the log book came into the possession of a young girl, and for several years she used it as a scrapbook for clippings and a place where she entered her thoughts, in pencil, directly over the earlier writing. A few notes show that she's making her entries between 1870 and 1874, and that she's in school, probably in Wakefield, Mass. Now I'll let her speak for herself.

"Indeed there are never any differences between man and wife wives and husbands, the husband has only to take his snuff and the wife sneezes."

"I do not want to vote; I do not mean to vote, but I hold that woman's mind is capable of voting, and of knowing what she is voting for." 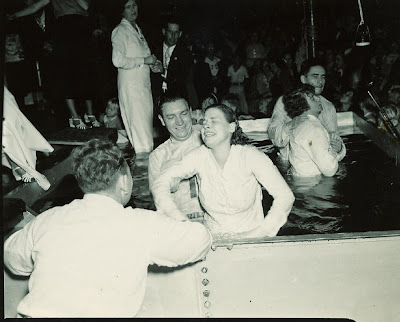 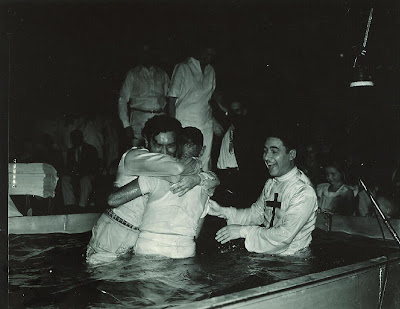 Congratulations to Jim Linderman on the first review of his project with Dust-To-Digital, Take Me to the Water: Immersion Baptism in Vintage Music and Photography 1890 - 1950. Jim's collection of vintage photographs of baptism will be featured along with rare gospel and folk recordings related to the subject. I'm eager for the general release of what will be an important contribution to the American story.

Images of these ceremonies are so compelling that I've collected a few myself, including the two above.
Posted by Robert at 10:54 AM No comments: 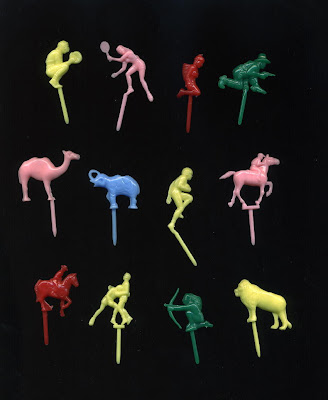 Family Birthday Candle Holder Assortment by Bachmann Bros. of Philadelphia. The box urges you to "Keep A Supply of Each on Hand" and "Buy Them Now!" Each little plastic package has a theme: cowboys and Indians, wild animals, sports figures male and female - looks like the 1950s to me.

Greeks get the credit for starting the ceremony of putting flaming candles on bread offered to Artemis, Goddess of the Moon. Germans are believed to have started the business of candles on cakes in celebration of your birthday in the 18th century. The Sears Roebuck catalog began offering birthday candle holders in 1927.

Now it seems we just stick candles right into the cake. Nothing wrong with that, but figural candle holders are due for a comeback.
Posted by Robert at 12:26 PM 2 comments: 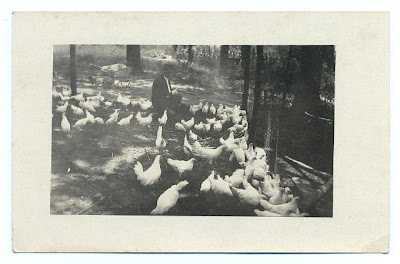 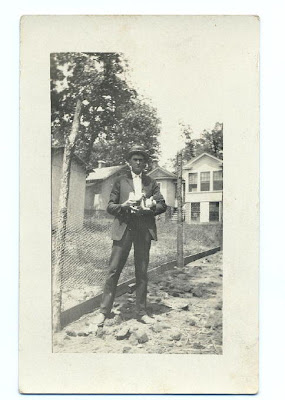 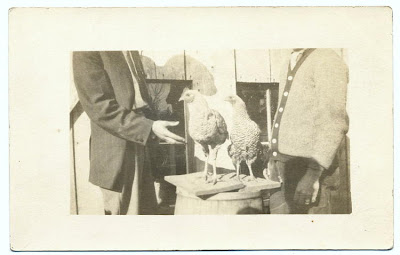 Once I was riding an elevator car in an upscale residential building in NYC with a man who I knew to be, well, blunt in his assessments. In truth, he was a psychiatrist (but I was only visiting, swear). Anyway, a little elderly lady gets on, and she's holding one of those tiny, profusely hairy animals that some people call a dog. You know the kind, you can't see their eyes, and their weight is measured in ounces. The doctor says gruffly, "Isn't it amazing what people can love?" Being Southern, I wasn't supposed to laugh. Being appalled, I couldn't help it.

That memory sometimes comes to mind when I see something in which people take a bewildering pride.

Such as in these real photo postcards, where folks have posed for posterity with their favorite chickens.

Chickens.
Posted by Robert at 4:54 PM No comments: 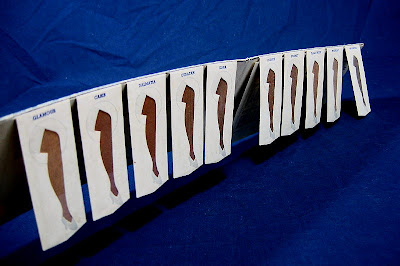 One of my favorite pieces of advertising ephemera, this folding card from Dovedown Hosiery Mills in Griffin, Georgia, opens to reveal two long lines of "legs." Each has a slightly different sample color of ladies' hosiery. They're individually hinged at the top, so that the entire series swings out and back, giving something of the effect of a kick line of dancing chorus girls.

This was the spring and summer line for 1937. It's probably not a coincidence that the Rockettes had won the grand prize at the "Paris Exposition de Dance" in 1936. And the Hollywood choreographer Busby Berkeley was doing some of his geometric dance work in the years just prior.

There must have been a powerful appeal in suggesting that the woman wearing them shared the vitality of those performers, emphasized by the exotic, ethnic colors like Carib, Cubatan and Kona hinting at something sexy and forbidden.

But it's the innovative design and animation that sells me.
Posted by Robert at 3:10 PM 2 comments: 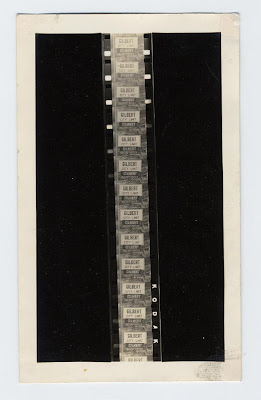 Consider this thing: a photograph of a strip of motion picture film consisting of a sequence of frames showing only a motionless sign. 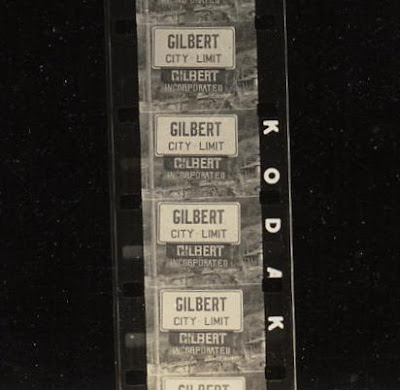 Gives a new meaning to film still.
Posted by Robert at 9:30 AM 1 comment:

One of the most interesting artifacts I've had is something I was never supposed to see. The fellow from whom I got it said that it was smuggled out of a military research lab in the 1950s, and that I should keep it secret. Which I did for many years, until it was recently declassified. So now I feel free to show it here.

This device is called a blackout bulb, and its remarkable property is that when turned on, it emits only darkness.

You can imagine how important this device could be, useful for concealing virtually anything in darkness.

The first picture below shows it when it's turned off.
The second picture was taken by a high-speed camera in the split-second before it is fully deluminated.
The third picture is a photograph of the bulb when it is working. 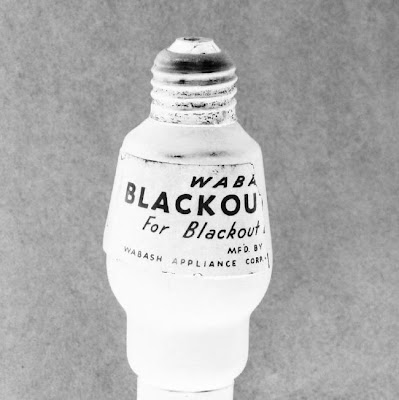 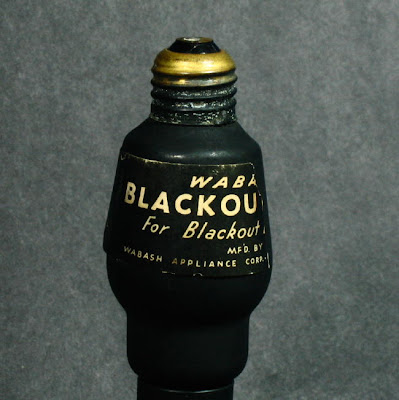 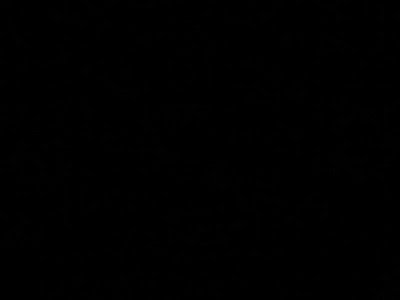