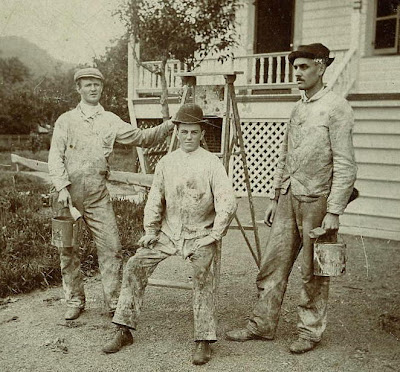 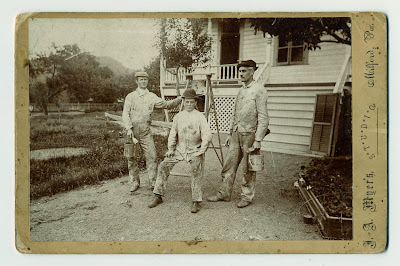 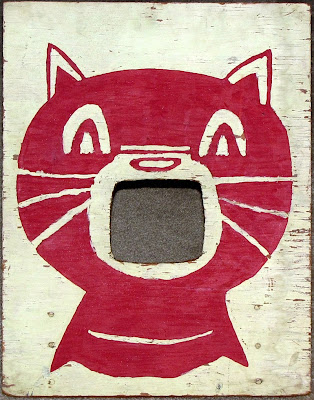 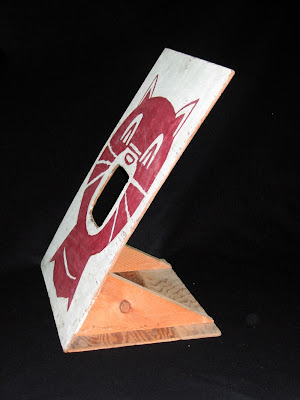 Months ago I was given a photograph by a fellow who sells them. It was a tattered sample of what he promised was to come, and he knew I'd want to buy. But month after month, he apologized that he hadn't been able to get them from his source, a member of the subject's family. This past weekend, he found out why. His source is in prison. So it may be that this is the only one I'll be getting.

It's a picture of an athlete named Forest Maddox, a professional baseball player who had no left arm. He was known to his teammates and the public as "Wing" or "One-Wing." I doubt that bothered him much. In the late 19-teens and early 1920s, he played for the Atlanta Black Crackers, the Knoxville Giants, the Washington (DC) Braves, and the Birmingham Black Barons. A 1921 article in the Washington Post stated that "As an outfielder he amazes spectators by the dexterity with which he catches a ball with his one gloved hand, tosses it into the air, removes the glove and with lightning-like rapidity snatches the ball again and relays it to the infield." He was a pitcher, too. If you've ever read baseball cards, they specify which side a player bats and throws from. It amuses me a little that, for this one-armed player, his stats profile reads: Bats: Right, Throws: Right. 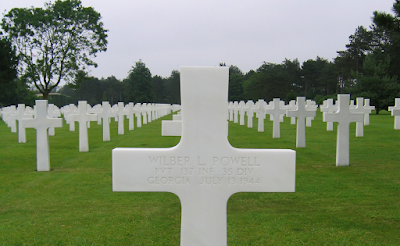 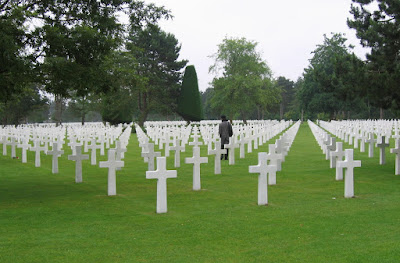 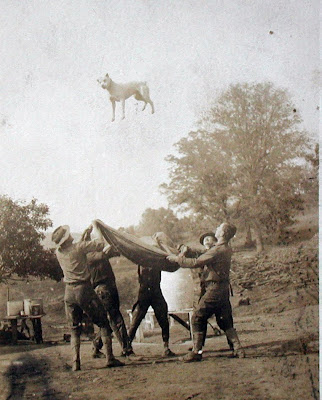 ...must be pretty tolerant when it comes down. 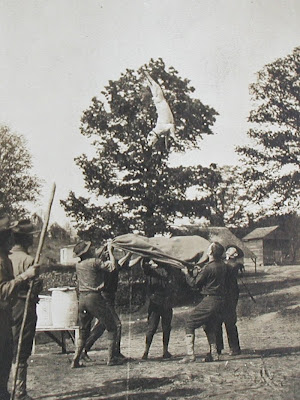 I claim no special insight into the behavior of men, though I happen to be one myself. But here's male mathematics: group of guys + a blanket + a dog = airborne Ranger.

Given the same two items, five women, I predict, would not fly the dog.

Once I start down that path, I usually get into trouble. So let's just enjoy the pictures.
Posted by Robert at 4:41 PM 5 comments:

Remembrance of Things Past: Someone Else's Life 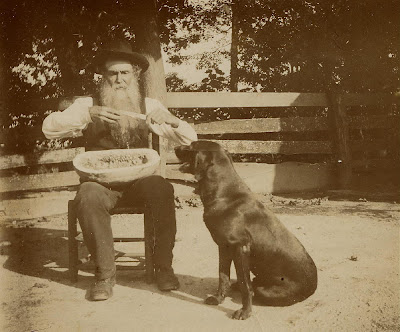 This post started out as just a few watermelon images I have, sort of lamenting the end of summer. But melon becomes madeleine today.

Instead, it's about what one of the pictures, above, shows and doesn't show. You see the photo and see an old man, enjoying the heart of half a watermelon and the company of his dog. Simple pleasures in the autumn of life. His name was Juan Fernandez McLean, of Scots-Irish descent despite the given names. The dog's name is Mike.

Here's some of what it doesn't show. (All this comes from a letter he wrote in 1884 to a niece, and some public records.)

"On the 4th of February 1846, just a little after sunset, Mama was stricken down very suddenly of a heart disease, and died almost instantly. Thus at an early age we were deprived of a fond, loving Mother, and right at a time when we needed her care and council the most. She was a devoted Christian and faithful Mother and her loss was irreparable. As young as I was, I felt that my best earthly friend was gone, and her place could never be supplied; and while I write this, tears flow in remembrance of her. It was a loss that none can know anything about except those who have been similarly bereaved. I can sympathize and weep with motherless children, and pray God to verify his promises to them. Our Father, it did seem, could not sustain such a shock. His grief was indescribable. It was so sudden and unexpected that he could hardly bear up under it; but his children had claims upon him, and like the noble and faithful father that he was, he tried to comfort and console them, although his own heart seemed to burst from his breast. He took his almost helpless children, and did the very best he could under the circumstances."

"She was young and tolerably handsome, but very ignorant and wholly incompetent to assume the responsibilities of such a family. I think this marriage was the greatest mistake of his life, and why a man of such prudence and discernment should make such a choice has been a mystery to his children."

"After being married nearly four years, Pa was taken sick, and after an illness of two weeks, he died on the 12th day of October 1850. We were now left in a wretched condition indeed. Our last and only earthly protector and councilor had left us..."

Having survived all that he did, Mr. McLean never lost his sense of humor. This is his description of his stepmother:

"A few month’s previous to sister’s death, an event took place that brought joy to all our hearts. That was no less than the marriage of our stepmother. No one after a long imprisonment, after being liberated from a prison, could have rejoiced more than we did. She married in Sept. 1853 to one David C. Mahaffy, a mean vagabond that no one knew anything about. After her marriage, she moved off three or four miles, taking her own children with her. Her husband lived with her a few months, spent what property she had, and then ran away to parts unknown. He has never been heard from since... She has suffered a great deal since she left the old homestead, but not more perhaps than she justly merited."

Then the bloodiest war in American history broke out. He joined July 8, 1861. He fought as a Confederate infantryman and was severely wounded at the battle of Cold Harbor on June 27, 1862. The doctor's report on his pension application describes the wound: "Ball entered right arm about half way between the elbow and shoulder blade on out side of arm ball ranged upward passing entirely through the arm & coming out inside of arm just below shoulder joint - ball shattered bone and cut muscle the bone never properly united and muscle perished away."

He went home to recuperate for a year, then returned to war, rejoining the fight until he was captured at Spotsylvania on May 12, 1864. Held in a prison camp until September, he was paroled and freed in exchange for Union prisoners. Then he went home. Three of his brothers had died in the war.

"When I reached home, I found many of the people in a destitute condition. Most everything that any of my brothers' families had, had been swept away. We had lost everything except what little land we owned. I took charge of brother Oliver’s children, and on Dec. 29th, I married his widow, and began to make some arrangements to sustain them, which I found exceedingly difficult, and for months we were hard run for the necessaries of life. But by hard work and economy we were, in a year or two, enabled to make something—at least a comfortable living."

There was more illness to come, but he bore it as he had his other tribulations:

"It is unpleasant to be afflicted, but I regret the condition I am in on account of my children, whom I was anxious to give a good education; However, I must not complain—no doubt it is all for the best."

I am sure it would astonish Mr. McLean that a stranger from the future is writing about him and his life, though I'm something less than a complete stranger. My great-grandfather was his neighbor, and had lost his left arm in the Spotsylvania battle on the same day Mr. McLean was captured.

When Mr. McLean died in 1916, the newspaper notice said this:

"Mr. J. F. McLane, of near Woolsey, died Wednesday of paralysis and the funeral exercises were conducted at Woolsey. Mr. McLane was seventy-seven years of age and since we can remember was considered one of the county's best citizens. He served as a member of the Board of Education for many years. He was active in his church and for more than forty years had superintended Sabbath schools in the county. The county and that section has lost one of its best men."
Posted by Robert at 9:38 AM 6 comments: 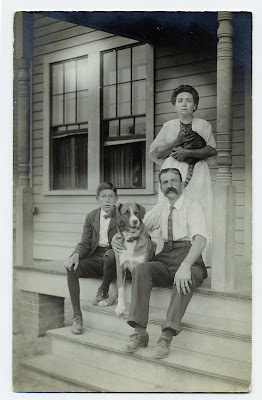 The relationships in this family seem clear. She loves her cat. He loves his dog. The boy...eh.
Posted by Robert at 2:54 PM 4 comments: 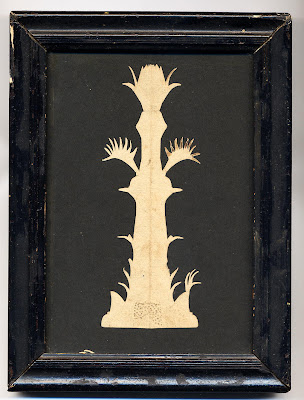 This is an example of scherenschnitte, or scissor-cut paper art. I like the stark white on black image. As far as I can tell, it's a fantasy plant, with the creepy fringed projections like carnivorous Venus flytraps, and the thistle-like crown. I assume this is a child's work, since it's a relatively simple. You can see that it was folded vertically before cutting to achieve the symmetry, and there are pinpricks at the base. One little spray on the left side has fallen off and has slipped into the base at lower left.

Scissor work is a really widespread practice, and folks have been at it for centuries. Portrait silhouettes were among the first affordable likenesses, and some of those artists, like August Edouart, are well-known to collectors. Their products were called shades, shadowgraphs and scissortypes. 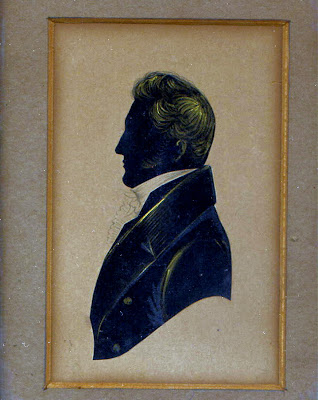 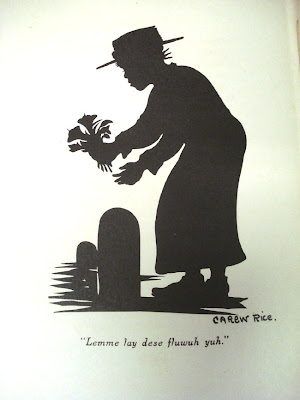 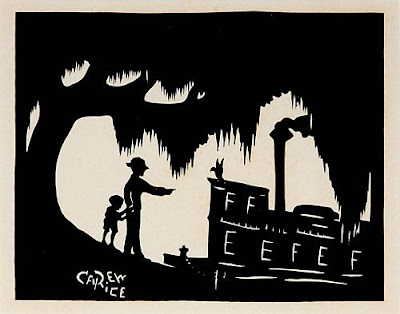 And the contemporary artist Kara Walker uses large-scale cutouts as her medium. I don't know that she uses scissors, but she cuts a lot more than paper. 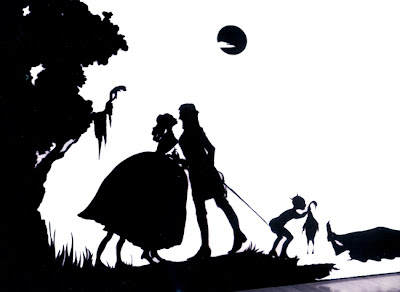 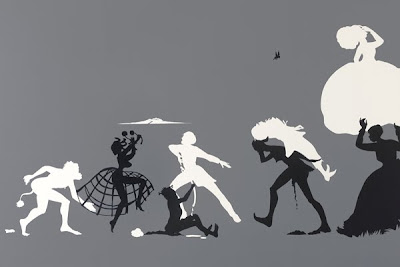 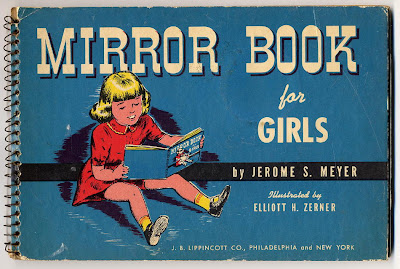 I've had an interest in unusual concepts in children's books for a long time. Pop-ups, mechanical, movable images, mix-and-match pages - I like them all. So I decided to share a few here over time. Today I'll start with the Mirror Book for Girls, by Jerome Meyer and illustrated by Elliott Zerner, published in 1949. There's a little reflective disc embedded into the back side of the front cover, and the idea is that the young reader will see herself reflected as various characters. Now, some of them are perfectly weird, like seeing herself as Alice in Wonderland or an Eskimo. Others are something like social gender role engineering - teacher, nurse (with baby), "airplane hostess," movie star. And it all ends up with the ultimate role for the good girl. Unfortunately the little disc is not so bright anymore, and you'll have to project a girl's face in there. 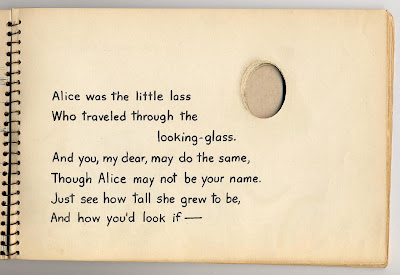 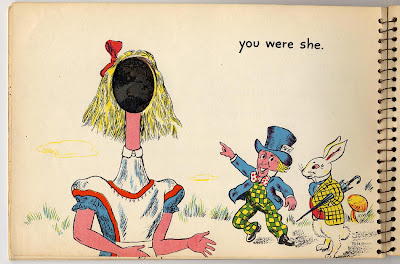 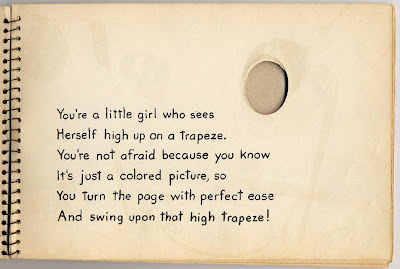 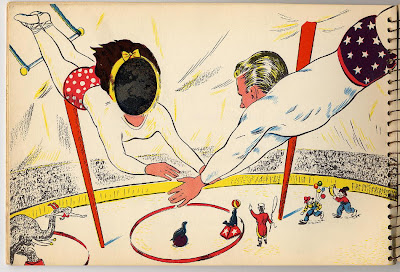 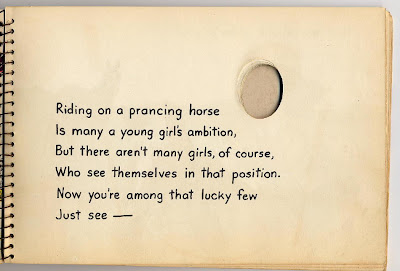 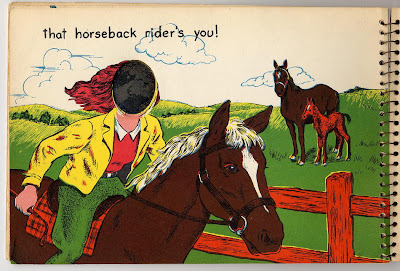 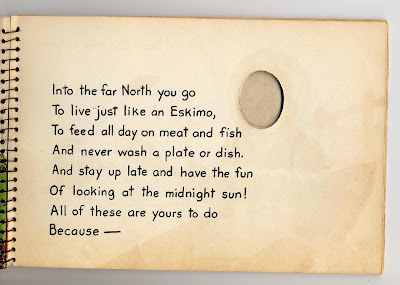 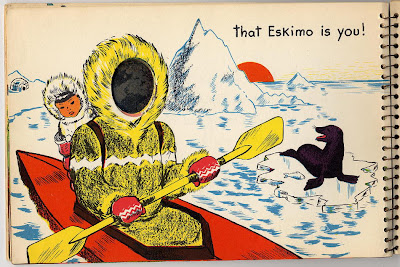 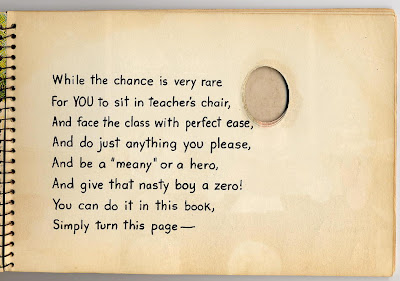 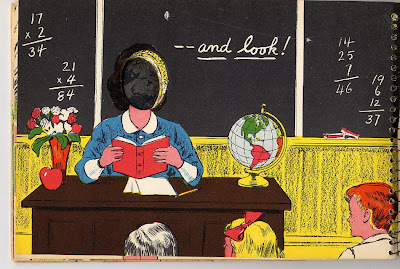 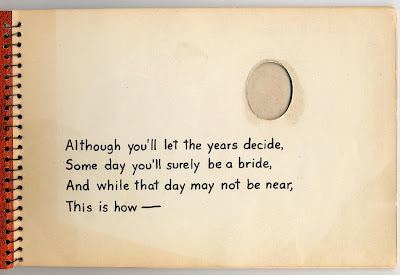 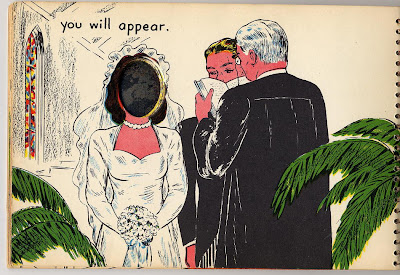